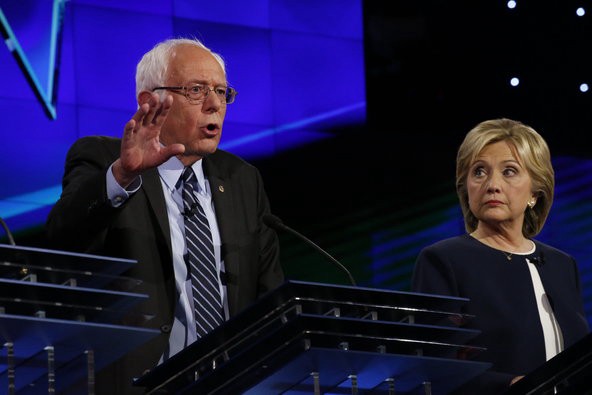 Research 101, Lesson One: In campaigns, define your opponent early and often.

It’s been said that by the time you recognize certain problems, it’s already too late to stop them. Like the Titanic steaming toward an iceberg, only to sound the alarm after it was too late to stop or turn. Or that extra drink that it took you to realize you already had one too many and have now agreed to go to a karaoke bar.

Hillary Clinton now faces this challenge as Bernie Sanders’ poll numbers rise in the early primary states. Polling has Sanders leading Clinton by double digits in New Hampshire and neck and neck in the upcoming Iowa caucuses. These numbers clearly, and rightfully, have many in Hillary’s campaign leadership fraught with concern. So, after accruing an undoubtedly substantial book of opposition research on the junior Senator from Vermont, Team Hillary has begun launching some of the juiciest attacks in their arsenal. The problem — it’s not going to work.

To understand why this strategy will be futile, one has to understand what I call the Castle Doctrine of Opposition Research. The term is coined for Mike Castle, a moderate Republican Congressman (and former Governor) who ran for Delaware’s open U.S. Senate seat in 2010. Castle was widely presumed to be the nominee and have a strong chance of winning the general election. But he failed to take seriously a primary challenge from a right-wing two-time failed candidate named Christine O’Donnell.

O’Donnell today is most famous for having to clarify that she was not in fact a witch, but during the primary, she was able to define herself as the grassroots Tea Party solution to taking back Congress. In the final weeks of the primary, Castle’s campaign finally unleashed an assault on O’Donnell. But it was too late. O’Donnell defeated Castle by just over 3,500 votes. As was later shown in the general election, the universe of oppo on O’Donnell was bountiful and effective in defeating her — even in a campaign against a once “bearded Marxist.” If Castle’s team had been prepared for the threat and acted earlier, defining O’Donnell as an unelectable, fringe candidate who would guarantee continued Democratic control of the Senate, things might have been different. As the Castle Doctrine teaches us, if you do not define your opponent early and often, they will define themselves.

In 2000 and 2004, the Bush campaigns put on a masterclass in defining their opponents early and often. When Al Gore appeared on the debate stage and came off as a dull, aloof policy wonk, it merely confirmed the image the Bush campaign had been pushing to the public and press for months. As part of the 2004 research team for President Bush’s re-election, I know that we started calling John Kerry a flip-flopper in January 2003, and we never stopped. Using a mountain of examples showing John Kerry’s record of flip-flops, we pushed that narrative with the press and public. By March 2014, when Kerry claimed he voted for funding our troops before he voted against it, his fate was sealed.

In 2012, Obama’s strategists employed this playbook to great effect against Mitt Romney. While Romney was stuck fighting his way through a bloody primary, the Obama campaign was busy portraying Mitt as a heartless corporate automaton who neither shared your values nor cared about people like you. For voters, Romney’s infamous 47% comment only secured a belief already instilled in them by the Obama messaging machine.

The idea behind the Castle Doctrine is to inoculate your campaign from a potentially serious opponent before they even become a threat. In order to do this, you must lay the foundation for any attacks you may want to use further down the road by defining the opponent in such a way that those attacks support what the public has come to believe about them. It’s as simple as the ancient adage from The Art of War, “Every battle is won or lost before it is ever fought.” In this case, to define your opponent before they can define themselves is key to victory.

The Clinton campaign’s failure to begin using their best oppo to define Bernie Sanders as the left-wing, fringe candidate that he is has allowed him to define himself as the progressive savior and fresh voice the Democratic Party needs.

As Team Hillary continues to cart out hits like Bernie’s glowing audio tribute to his hero, Eugene Debs, the media and voters have already decided who Bernie Sanders is to them. It may be simply too late to turn Hillary’s Titanic away from Iowa iceberg of how the electorate views Bernie, and the more aggressive the attacks become, the more Sanders supporters will point to them as evidence that their candidate is gaining momentum. Whatever silver bullets Clinton’s opposition researchers have been able to accrue on Sanders will sadly be fired in vein, as they bounce off the armor Bernie has built by defining himself before Clinton took up arms.