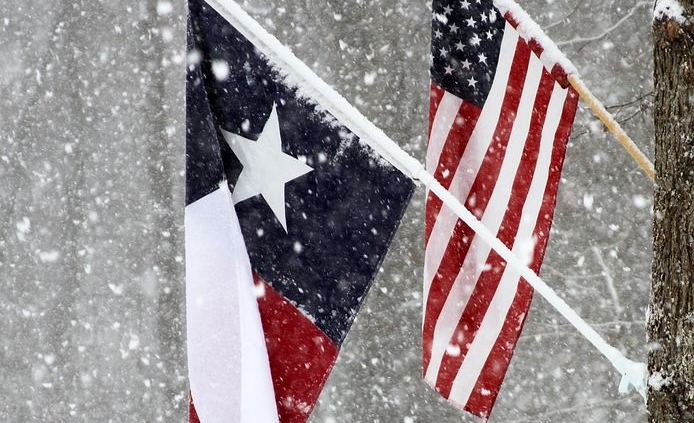 This report is brought to you by the competitive intelligence analysts at Delve as an overview of key trends we have identified to help energy professionals better prepare for what happens next.

WHAT THE TEXAS FEEZE ILLUMINATES ABOUT THE NATION’S ENERGY DEBATE.

In Texas Blackouts, Partisans Freeze Out Inconvenient Facts. In February, millions across Texas lost power during a historic freeze, but well before the state and federal government began to investigate what led to the grid’s failures, partisans had already drawn their battlelines. Pundits quickly took to the media to argue for their preferred energy sources and highlighted the data that supported their pre-determined view on energy policy. While those on the right argued the blackouts in Texas were the fault of Texas’s over reliance on wind and renewable energy,  those on the left claimed “Texas is making the case for the Green New Deal,” and argued ERCOT should “rethink” its “go it alone approach” with loose regulation of industry. The reality is, there is enough blame to go around, which “gives easy fodder for instant experts trying to confirm their priors.” While it remains to be seen what caused or didn’t cause the grid’s failure in Texas, it is increasingly clear that as such crises occur, the national discourse can be expected to rapidly become about laying blame and supporting pre-determined positions, rather than analyzing challenging problems and coming together to prevent their reoccurrence.

Frozen Dialogue Highlights Difficulty In Achieving Progress. As the national dialogue further enforces preconceived biases, it becomes increasingly difficult to agree on how to achieve shared goals. Americans want a cleaner, more reliable grid, and yet, there are broad disagreements about which policies to pursue to achieve those shared goals and what is an acceptable cost to pursue them. To realize the grid we all want, substantive, fact-based conversations that acknowledge tradeoffs need to be had.

Despite calls at the fringes for moving away from fossil fuels immediately, as even the United Nations observes, the conversation should be much more nuanced, and the U.S. Department of Energy notes fossil fuels remain critical to ensuring reliability and resilience of the grid. Similarly, despite criticism that the sun does not always shine and the wind does not always blow, renewables are increasingly becoming more affordable as they make up a larger part of the nation’s energy mix. As industry looks to engage in the type of nuanced debate needed to make progress, the lack of a substantive, responsible dialogue means industry’s contributions may never be “nearly enough.”

AS BIDEN’S WHOLE OF GOVERNMENT APPROACH TO CLIMATE CHANGE COMES INTO FOCUS, ENVIRONMENTAL JUSTICE IS AT ITS CENTER.

Advocates for such considerations secured their first victory of the Biden era even before the President’s inauguration with the selection of Michael Regan over Mary Nichols as Administrator of the U.S. Environmental Protection Agency. On Biden’s first day in office, Biden signed an executive order addressing climate change that directed the federal government to “advance environmental justice” and “seek input from … environmental justice organizations” in assessing Trump era energy and environmental rules. The order also directed agencies to incorporate environmental justice into the methodologies used to assess the “social cost” of various greenhouse gases.

As policymakers increasingly engage on environmental justice issues, activists opposing permitting continue to highlight this issue in their lawsuits and public comments as well. In Colorado, green groups recently sued the Colorado Air Pollution Control Division over a general air pollution permit for oil and gas wells across the state, claiming the permit “runs directly counter to any hope of obtaining environmental justice.” In Virginia, nearly 100 environmental groups recently wrote to state permitting boards urging them to oppose the Mountain Valley Pipeline they claim would “perpetuate environmental injustice.” In Louisiana, opponents of petrochemical development in the state have highlighted a recent United Nations report calling for an end to “environmental racism in ‘Cancer Alley,’” a pejorative term activists use to refer to an area in the state that contains a number of petrochemical and other industrial plants.

From plastics to pipelines to power plants, infrastructure developers need to be aware, as they seek new, expanded, or renewed permits, that opponents will increasingly seek to frame the debate through environmental justice lenses, and they will have a more sympathetic audience in Washington and some state capitals for at least the next four years.

OBAMA-ERA ENVIRONMENTAL ACTIVISTS WANTED TO GET “BEYOND COAL.” NOW IN THE BIDEN ERA THEY ARE FOCUSED “BEYOND CARBON.”

In The Past Decade, Environmental Activism Has Evolved From Obama-Era “Beyond Coal,” To “Beyond Carbon.” In 2010, as then-President Obama began to advance a slew of regulations targeting the coal industry, the Sierra Club launched the Beyond Coal Campaign with significant financial support from Michael Bloomberg. Only five years later, in 2015, the campaign was called “the most extensive, expensive and effective campaign in the Club’s 123-year history, and maybe the history of the environmental movement.”

In the years since Beyond Coal’s launch, Sierra Club claims nearly 340 coal plants have been retired or proposed to retire. In 2019, the group rebranded their efforts, with a new headline proposing, “America, Let’s Move Beyond Coal and Gas.” As Sierra Club’s efforts evolved, Bloomberg Philanthropies invested $500 million to support the Sierra Club and other groups in launching “Beyond Carbon” to “close 100% of all U.S. coal plants by 2030, stop the construction of proposed gas plants; and help win key state and local climate policy changes.”

Now, Biden Is Applying The Obama Coal Playbook To The New “Beyond Carbon” Era. At the end of President Obama’s time in office, the Sierra Club celebrated all they were able to accomplish with an ally in The White House. Now, environmental activists again have an ally in The White House, and President Biden seems set to follow the Obama coal playbook as he joins their “Beyond Carbon” efforts. Like Obama did, Biden is promoting enormous investments in renewables and green infrastructure, and like Obama’s coal leasing moratorium, Biden has placed a moratorium on oil and gas leasing on federal lands.

While much of Biden’s agenda may take time to work through the regulatory process and in some cases the courts, he is also showing a willingness to target projects at the individual level. From Keystone XL to potentially the Dakota Access Pipeline, Biden appears set to target fossil fuels at the macro level through regulatory action, and at the micro level through various permitting, review, and approval processes.

As Biden’s Administration Takes Aim At Carbon, Fossil Fuel Fights Accelerate At The State Level. At the beginning of the year we wrote that natural gas’s opponents have growing momentum as gas ban and electrification efforts swept across the nation. As the Biden Administration targets fossil fuels at the federal level, at the state level, fights over fossil fuels have already accelerated in the new year. In January, the city of Denver advanced electrification efforts, and in February, Seattle Mayor Jenny Durkan signed a law “effectively banning natural gas space and water heating in new apartments, hotels, and commercial buildings.”

In New York City, Scott Stringer, “an early front runner” for mayor, “pledged to completely phase out fossil fuels, drive private utility companies out of the nation’s largest metropolis, and ‘electrify everything,’” if elected. In January, Washington State became the first state to consider legislation to ban natural gas infrastructure in new residential and commercial construction. Despite the progress by anti-gas activists, lawmakers in Kansas, Mississippi, and Georgia are now considering legislation to prohibit municipalities from limiting energy choices in construction.

As fights over natural gas bans continue to spread across the country, in California, where the gas ban movement scored its first win in 2019, a new trend is beginning to emerge: outlawing new gas stations. On March 1, 2021, Petaluma, California became the first city to pass such an ordinance, but as we’ve seen with the gas ban fights, ideas that start at the local level in California can often spread across the country.

Jobs And Economic Arguments No Longer Persuasive, As The Public Sentiment Shifts On Climate Action. In 2009, “cap and trade was the policy of choice for tackling climate change.” By 2010, the concept was “in wide disrepute,” following opponents labeling the policy “cap-and-tax,” and over concerns the policy would be a job killer. Today, jobs and economic arguments no longer seem to hold the weight they once did. Environmentalists beat out jobs when President Biden cancelled Keystone XL, despite a lack of clarity about where  displaced workers can go to get the “green jobs,” promised by Biden’s top climate official, John Kerry. Polls show Americans believe “stricter environmental regulations are worth the cost,” (though that may be as long as someone else pays the cost.) Additionally, among many Americans who support a transition to a “100% clean energy within a decade,” there is a belief that such policies “would on balance ‘create new jobs and growth’ instead of ‘hurt jobs and the economy.’” As industry considers the policy fights taking place at the local, state and federal level, it must seriously consider how effective jobs and cost messaging remain amongst policymakers and the public.