For many Americans, this weekend’s big game is all about the commercials. This year, depending on which state you reside in, you may have noticed more of these ads before the weekend even arrived touting online sports betting apps. That’s not surprising, given the American Gaming Association estimates 23.2 million people will wager approximately $4.3 billion on this year’s Super Bowl matchup between the Kansas City Chiefs and the Tampa Bay Buccaneers, with 7.6 million people placing bets using an online sportsbook—a 63% increase over last year.

Why the sudden uptick in (legal) sports betting? Since the 2018 Supreme Court decision overturning the Professional and Amateur Sports Protection Act of 1992, which prohibited sports betting in every state other than Nevada, the sports betting industry has boomed into a market that grossed roughly $1.4 billion in gaming revenue in 2020. With so much revenue at stake, states and localities across the United States are being forced to at least consider the implications of legalizing sports betting and what kind of regulations make the most sense for those communities and their constituents. However, despite the sharp growth in legal sports betting across the country, public affairs professionals and lobbyists who are suiting up to help sportsbooks score face a formidable defense looking to prevent them from reaching the end zone. Here’s what you need to know about the debate that’s taking the field.

In less than two years since the Supreme Court decision that allowed state legislatures to decide whether to permit legal sports betting, twenty-two states and the District of Columbia have made such betting legal. This past election day, voters in three other states – Maryland, South Dakota, and Louisiana – approved ballot measures to legalize sports betting, but residents of those states are still waiting on their state legislatures to set up regulatory measures before those bets can be placed.

While sports betting has become widely adopted across the nation, the regulatory landscape surrounding sports betting varies immensely. Public affairs professionals working with industry leaders must also be aware of the way in which state legislatures permit wagers to be placed. Most states allow a combination of private mobile app based and brick and mortar betting while others only allow betting to take place at designated “retail” locations. One state – Tennessee – authorizes bets to be placed solely on web apps. Another consideration is whether states will open sports betting to the free market or if they will use a limited or single-operator model, such as the one currently being proposed by New York Governor Andrew Cuomo.

Not Giving It The Old College Try

Of the twenty-two states that currently license sports betting, fourteen of them have restrictions on placing bets on in-state college athletic events. Now as the Massachusetts legislature continues to mull over whether it will become one of the next states to legalize the booming industry, a group of local colleges and universities are standing in opposition to the current version of the bill, which includes language permitting wagers to be placed on college athletic competitions. The group, led by Harvard University, fears “such legislation will create unnecessary and unacceptable risks to student athletes, their campus peers, and the integrity and culture of colleges and universities in the Commonwealth.” In addition to Massachusetts, several other states are expected to introduce legislation in the next year, while many others have failed to move the ball across the goal line in years past.

California, Texas, and Florida—home of more than a quarter of the teams playing in the four major professional sports leagues—have yet to legalize sports gambling, creating room for continued growth for an industry that has already boomed over the last two years. After facing immense pressure from the Tribal community in California, however, the states’ legislature withdrew consideration of a bill that would have legalized online and in person sports betting. Tribal leaders took exception to the online component and argued that the legislation would have broken an agreement between the tribes and the state.

Tribal opposition also stalled legislative efforts to legalize sports gambling in Minnesota, Arizona, Connecticut, and Florida. Despite the opposition, each of these states are continuing to push forward in hopes of reaching an agreement. The Arizona House of Representatives is considering an updated compact that will allow tribal casinos to offer both retail and mobile sports betting while also enabling professional sports teams in the state to offer sportsbooks at their stadiums.

In Texas, a fight is shaping up between competing out of state interests. While casino operators in neighboring Oklahoma and Louisiana have fought to keep gambling out of the Lone Star state, Bill Pascrell III, a lobbyist with Princeton Public Affairs Group, has said that “something is going to happen in Texas.” Indeed, Las Vegas Sands has seen its Texas lobbying team balloon recently as it continues its ambitious plans to expand into Texas, and Texas Governor Greg Abbott’s office has reportedly reached out to regulators in states such as New Jersey that have successfully implemented sports gambling for advice. Meanwhile, the state legislature is considering a bill supported by the owners of three of the state’s biggest professional sports teams that would issue licenses to the state’s professional sports teams allowing them to sell betting access to sportsbook partners, similar to what is being considered in Arizona. 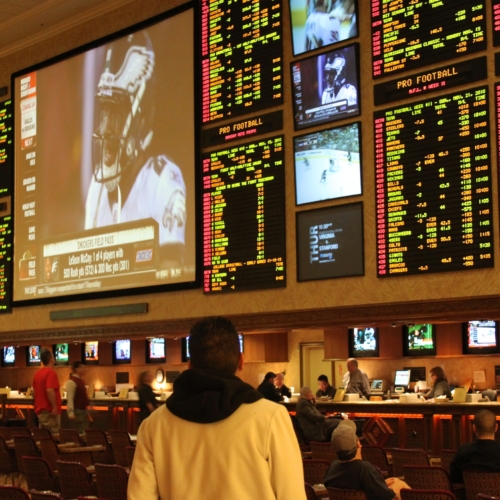 With an estimated $150 billion illegally wagered on sports in United States, market intelligence company H2 Gambling Capital projects that as legal sports wagering in the US continues to expand, the industry will be worth roughly $2.75 billion in 2023 and has the potential to grow to $81 billion in 2030.  However, just as the great coaches seek a competitive advantage through film study, practice, and innovation, public affairs professionals will need a competitive intelligence advantage to shape the debate over sports betting.