Revisiting The Unemployment Rate, Patagonia’s Political Play, And Whose Painting Is It Anyway? 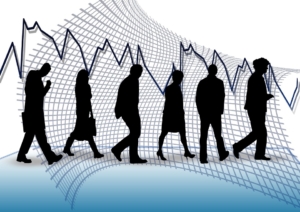 Here’s What You Need To Know…

In a Medium post during the summer of 2016, we made the bold assertion that “the unemployment rate is dead” as a political talking point, and maybe even as an economic statistic. At that time, the rate’s decline was largely due to people leaving the labor force, creating a “new normal” that meant the statistic could no longer provide a meaningful indicator of – or a campaign talking point about – how people were doing economically.

Understanding how to interpret this statistic remains important as the tax reform debate continues to unfold. Some are arguing the economy is in danger of overheating and that the proposed GOP tax reform might make that danger worse. Yet incoming Federal Reserve Chair Jerome Powell has made clear he remains concerned about the disappearance of men from the U.S. Labor Force, and that such participation, along with productivity gains, are key to growing the economy. His comments seem to suggest the bullishness on unemployment in some quarters is not supported by economic reality for many Americans.

With that in mind, we wanted to refresh our analysis of the unemployment rate, and see whether it remains, to borrow from our June 2016 post, “divorced from other economic indicators”:

WHOSE PAINTING IS IT ANYWAY?

Are Middle Eastern geopolitics behind the misinformation surrounding the buyer of the world’s most expensive painting? After being sold at Christie’s last month for $450.3 million, Leonardo Da Vinci’s Salvator Mundi – a painting that depicts Jesus Christ in Renaissance clothing – was reportedly sold to an intermediary for Saudi Crown Prince Bin Salman. Al Jazeera, the news network based in rival Qatar, quickly accused the Saudi Crown Prince of buying a “Christian painting” that is “contrary to the teachings of Islam,” which was then picked up by other news outlets in the region and around the world.

It was later revealed that the intermediary was actually acting on behalf of the United Arab Emirates, who will display the painting in The Louvre Abu Dhabi, leading to speculation that the public misinformation campaign was a tactic by Qatar to embarrass and undermine Prince Bin Salman as he leads a massive anti-corruption crackdown in his country. The incident shows how careful reporters and the public must be when relying on vague and anonymous sources in the media.

When Quartz covered how Google’s Android collected users’ locations, the story included details from an interesting source: Oracle. The two tech giants are locked in an ongoing federal court battle over allegations that Google copied portions of Oracle’s computer code Java, and a large amount of the latter’s $8.8 million in lobbying spending this year has been used to publicly challenge Google on key policy debates.

This campaign, which even included billboard ads in Tennessee, further demonstrates a shift in the influence industry that led to the launch of Delve in December 2015: in today’s fast-moving environment, shoe-leather lobbying alone is not enough to achieve desired outcomes. As policy battles are increasingly played out in the public arena, what you don’t know about your opponents and their advocacy efforts can lead to missed opportunities or unanticipated attacks that undermine your public affairs objectives.

ANOTHER TAKE ON THE ELECTION-MEDDLING NARRATIVE

Might Russian President Vladimir Putin not be the geopolitical genius the world makes him out to be? That’s the narrative pro-Western liberals living in Putin’s Russia want to highlight, suggesting that America’s fixation on the Kremlin’s election-meddling – and on the image of Putin as a calculating, savvy, and triumphant operator on the world’s stage – reinforces the Kremlin’s domestic narrative.

Putin’s domestic opponents see this compounded further by the U.S. being gripped by what they consider a “Russian-style spasm of paranoia and conspiratorial thinking,” blaming “internal problems on sinister outside forces.” So what is one to do? Take a deep breath, remain calm, and let the facts of the investigations lead where they may.

When President Trump reduced the size of two national monuments in Utah, outdoor-clothing brand Patagonia went on the offensive by suing the Trump Administration, alleging that the President’s actions are unconstitutional. In an interview, the CEO was more direct: “The government is evil and I’m not going to sit back and let evil win.”

Patagonia has already waded into the political arena, having criticized the President earlier this year for pulling out of the Paris climate agreement, but the lawsuit demonstrates a step further for the company. Since announcing its intent to engage the administration over the national monuments in Utah, the company’s sales have been up by 7%, which may inspire other companies to follow suit and use political stances to attract – or inspire additional purchases by – like-minded customers.

Last December, a fake U.S. embassy in Accra, Ghana – which according to a Department of State article greeted visitors with “an American flag and a photo of President Obama” – was reportedly shut down. The facility allegedly was operated by Ghanaian and Turkish crime rings for nearly ten years, whose members posed as consular officers and charged customers as much as $6,000 for fake documents.

But the embassy and the documents are not all that’s fake: it turns out the story is, too. An investigation by The Guardian found that the story actually conflates plotlines and images, while adding some imagination, to create a fake U.S. embassy that never existed – giving a whole new meaning to #fakenews.