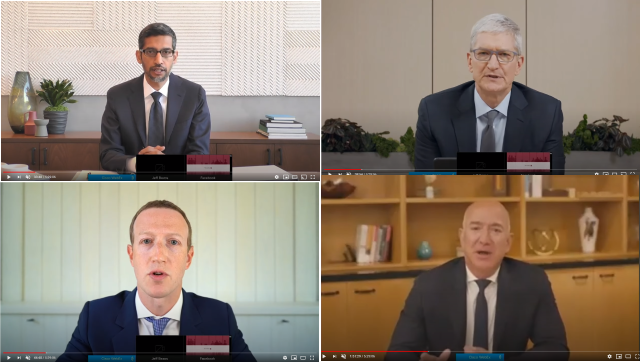 Watching the four major technology industry CEOs be called before a Congressional committee this week, public affairs professionals inside and outside the Beltway could only think, “There but for the grace of the news cycle goes my boss.” Indeed, that hearing was just one of several prominent hearings held this week that highlighted a challenging recent trend to which public affairs teams must adapt to protect their companies’ and industries’ reputation and policy interests.

Congressional hearings as theater is certainly not new, but like many other aspects of today’s civic discourse, the rancor has reached new depths. From how and why hearings are held to how Members of Congress use (and “reclaim”) their time for questions to whether witnesses even get to answer those questions to the speed and volume of reporting and messaging around a hearing, the spotlights on seats at the witness table produce more heat (and less light) than ever before.

To ensure their principal is prepared for this hot seat, public affairs professionals need to dig deeper to ensure they understand their side’s vulnerabilities and challenges, anticipate the motivations and messages of the legislators, and be fully aware of the other stakeholders and advocates looking to use the hearing to their advantage. Because hearings happen in an echo chamber, not a vacuum, here’s what you need to know to navigate them successfully.

Congressional hearings have changed – so must your strategy to survive them.

For most of history, Congressional hearings have been largely focused on legitimate fact-finding. Lawmakers would interview witnesses as they sought to understand current events, solve a problem, or craft legislation. These days, however, Congressional hearings provide lawmakers uninterrupted camera time in the hopes of creating a viral moment their allies and supporters can highlight well after the hearing concludes. And during the Trump Administration, much of the posturing in hearings is meant to prove or disprove the validity of executive action or statements, even when the witnesses are from the private sector.

Disconnecting Congressional hearings from their legislative purpose also means witnesses can be called up time and time again to keep the spotlight on an issue, leaving little hope that a matter is closed once a long day of hearings is done. To be prepared for a marathon of scrutiny that may never end, public affairs teams must have a long-term strategy grounded in consistent, actionable intelligence. Getting and keeping the information advantage offered by such intelligence means following these three rules of hearing survival.

Vet Your Witness: Smart witnesses know they should have as much knowledge about their own vulnerabilities and challenges as they do about the others in the committee room. These concern not only the individual testifying but also the organization and industry they represent. Lawmakers, fellow witnesses, and the press may call into question educational and professional qualifications, social affiliations, political leanings, media controversies, social media posts, or articles written long ago in different times. An edgy Facebook post may have gotten laughs in 2008, but it may be out of bounds in 2020. “Liked” a tweet to bookmark it for later reading? Get ready for it to be viewed as an endorsement of another Twitter user’s views. These days, nothing is off limits, and no one is given the benefit of the doubt. Witnesses must accept this reality and anticipate potential challenges it could pose. A thorough vulnerability analysis of the principal and organization ensures there are no surprise questions or fumbles that could have been avoided.

Assess Your Organization and Industry: Lawmakers and the press may also dig deeper into the state of the organization a witness represents, forcing them to deftly and truthfully respond to inquiries about employee welfare, investment practices, hiring standards, profits, executive compensation, and international relationships. Here, again, political contributions and advocacy of the witness, organization, and its affiliated industry can come into question.

A witness should also be prepared to address past organizational or industry problems, as well as provide concrete examples of how these wrongs have been righted and how leaders have taken accountability to correct the course. Throughout preparations and the hearing, public affairs professionals should keep in mind how their organization and industry are currently being viewed by lawmakers, stakeholders, the public, and the press. If current views are negative, they must develop messaging that is not merely defensive, but instead, explains its merits and justifies the validity of their testimony. Without a clear-eyed assessment of your risks and challenges, you cannot survive such questions in a public hearing unscathed.

The second rule of hearing survival: read – and research – the room.

Understand Legislators’ Motivations and Expectations: Hearings are usually intended to generate headlines. So in addition to the obvious logistics of a hearing, public affairs professionals should consider the motivations and expectations of those calling the hearing – whether they are to drive a public narrative, glean actual knowledge about a topic, or merely use the witness as a proxy for the opposing party or administration. There are also interest groups – labor unions, trial lawyers, advocates, industry coalitions – who want hearings called and who provide lawmakers with materials to frame the debate. It is often these same groups with whom a witness’s organization frequently interacts, whether positively or negatively. Keeping a careful watch of these stakeholders’ and advocates’ ongoing activities, messaging, and tactics can give a witness a better grasp on why a hearing is taking place and how others might want to use it.

Know Who is on the Dais: Beyond the hearing setup, witnesses must be keenly aware of the personalities and agenda at play on the dais – who is friend and who is foe, and who has hidden interests or connections? Lawmakers may have a specific policy passion that guides much of their political philosophy and work on the Hill, and naturally, they may have their own conflicts of interest, too. Lawmakers also have sizable research teams, both in their personal offices and on the committee staff, not to mention the materials provided from advocates and lobbyists, so they will be ready to ask the hard questions. Not only should witnesses be prepared to answer those questions, but they should also know why they are being asked.

Lights, Camera, Action: For many lawmakers, hearings present a rare opportunity for uninterrupted camera time. This new reality can transform committee hearings from fact-finding missions to live performances, complete with dramatic displays and pithy one-liners, often at the witness’s expense. In recent weeks, Americans have seen firsthand the manic tendency of lawmakers to “reclaim [their] time,” giving a witness few or no seconds to answer a question or respond to an accusation made about them.

Unfortunately, lawmakers sometimes have little to no basic knowledge about a topic of a hearing. They typically rely upon notes and prepared questions from staffers, but they might not understand answers a witness gives or the complex issues they are ostensibly trying to explore. To save face, some lean into bombastic and fact-less tirades, leaving the witness no choice but to sit silently as he or she is smeared. If a witness is prepared, he or she won’t be rattled. Instead, the witness will fully expect a lawmaker or fellow witness to act on behalf of a particular agenda and will know how to anticipate, pre-but, and navigate it.

Identify Who Really Drives the Narrative: While they might not have an actual seat at the table in the committee room, there are other players to consider in a Congressional hearing. The media can frame a hearing however they’d like, often looking for “gotcha” questions that embarrass a witness or a sensational exchange that may get clicks without including any substantive content. In the era of soundbites and Twitter quips, a quote can be sliced and diced without context to create a totally imagined reality. Thorough, insightful research can help a principal better prepare by increasing his or her awareness of how the subject matter, an organization, or a witness is likely to be portrayed by the press.

Prepare to Preempt: While activists may not always be in the committee room, they can still shape what happens, whether with in-person protests or by flooding social media feeds with hostile messaging. Effective competitive intelligence is more than watching when it happens. It requires tracking previous activities, projecting their future plans, and anticipating risks to those they target. It also means fully grasping the extent of their influence, as well as questioning their credibility. They, too, have biases and vulnerabilities to consider.

Use these rules to adapt. Public affairs is now survival of the smartest.

“Always be prepared” is more than the Boy Scouts’ motto. It is how smart public affairs professionals regard the work they must do to be ready for such a moment long before it arises. Organizations need to know what their friends and foes say about them, and they should be prepared to address any attack that could come their way. That takes more than monitoring media mentions. It means understanding how their detractors talk about them, organize against them, and plan to make life difficult for them. This requires a long-term investment in competitive intelligence. By the time you think you need it, it may be too late to learn all you need to know.