Teachers Featured, Something Syriasly Wrong, And Got Fake Milk? 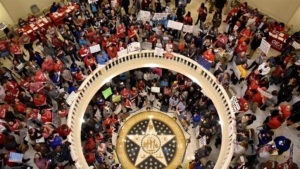 Educators across the country have been emboldened by the teacher’s strike in West Virginia that resulted in a 5% pay raise, and although it ended last month, since then, teachers in red states like Kentucky, Oklahoma, and Arizona have followed suit – in some cases shutting down schools – to pressure lawmakers to respond to their concerns. As with most public policy issues that gain notoriety, grow quickly, and feed into a larger narrative, it can be difficult to untangle the particular concerns of different stakeholders from whatever focus the media and organizations with their own agendas latch onto. Here is what you need to know about these teacher protests:

It remains to be seen whether this year’s wave of protests will be different from those experienced in Wisconsin in 2011 or Chicago in 2012, or if protests like these will become more common as there is greater demand for increasingly scarce public funds (and the midterm elections grow closer). Already, teachers in places like Colorado and California are continuing the wave of protests, and as developments unfold there and elsewhere, remember that the sum of a larger protest narrative is often different from its parts.

Maryland dairy farmers Randy and Karen Sowers are suing the FDA over labeling requirements that would require their South Mountain Creamery to relabel the skim milk they sell to thousands of mid-Atlantic customers as “imitation” milk. The suit, which was filed with the help of the non-profit Institute for Justice, focuses on an FDA regulation that allows a product to be called “skim milk” only if it includes added synthetic vitamins A and D.

However, the Sowers’ product follows the dairy origin of the term, ’skimming’ the cream off of the fresh milk without any additives, meaning that they need to label their product as an “imitation” – thereby confusing consumers and potentially hurting business – or face thousands of dollars in fines and even jail time. While there is legitimate need for regulations ensuring food safety, as this week’s 200-million-plus egg recall over salmonella fears demonstrates, the Sowers’ lawsuit highlights some of the nonsensical regulations that could stand to be “skimmed” for the benefit of small businesses and consumers.

Few roles are as crucial as chair of next month’s United Nations (UN) Conference on Disarmament, particularly in light of further chemical attacks in Douma, Syria. Yet in another irony fit for the UN, the Syrian regime of Bashar al-Assad is set to preside over the 65-nation conference, which has been integral, along with its predecessors, in negotiating the treaties limiting proliferation and use of nuclear, chemical, and biological weapons.

Given that the U.S. and its allies have concluded that the Assad regime is responsible for the use of chemical weapons against its own citizens in Syria, the U.S. ambassador to the conference, Robert Wood, has stated that Syria “has neither the international credibility nor any moral authority” to lead the forum, despite being its turn in the alphabetical rotation used among the 65 member countries. It remains to be seen whether the U.S., European Union, and UN chief Antonio Guterres will protest the conference, but regardless, the Syrian regime’s participation would be seriously wrong and undermine the body’s credibility at the precise time when it is needed most.

CONGRESS, THE COURT, AND QUILL

It’s tax week, and the ramifications on this week’s events may go beyond just write-offs, federal income taxes, and local taxes. That is because the Supreme Court heard arguments on Tuesday in a case brought by South Dakota that urges the Court to overturn a 1992 decision in Quill Corp v. North Dakota, which prevents states from collecting sales tax from out-of-state vendors. South Dakota, which has no state income tax and therefore depends on sales tax revenue, describes the ruling in Quill as outdated, arguing that the Court needs to act because Congress has not addressed this issue in the 26 years since the original ruling. Furthermore, the growth in  online e-commerce giants like Amazon, eBay, and others has only added to the urgency to resolve it.

Yet, while overturning Quill may seem to benefit states in a step toward 21st century commerce, the patchwork of state-specific sales tax laws could result in a regulatory burden on small businesses and startups. If states would be looking for policymakers to then enact a nationwide e-commerce policy, they may ultimately find themselves waiting for Congress to act again.

A lawsuit brought by the watchdog group Public Citizen will allow voters to examine the visitor logs for four agencies in the White House complex, and may raise further questions about whether such information is useful on its own to the public. Despite the lawsuit’s focus on the current administration, other administrations have not escaped scrutiny due to their actions on this issue. Visitor logs, like many raw records obtained through the Freedom of Information Act (FOIA), can be difficult to decipher due to too much information and too little context, the result of which can lead people to miss important trends.

So, while the new logs will offer a glimpse of who is visiting certain White House offices, it is just that – a glimpse, and one without much context at that – which is why Delve analysts are specially trained to synthesize vast amounts of public records through a public policy lens and into neatly-packaged, actionable insights.